When this set was released in 2003, I remember thinking what a lovely looking set and I would love to collect the whole set thing. I pick-up a few cards here and there, but never fully committed to finishing it off.
The original Play Ball set produced by Gum Inc. in 1939, when no other gum companies were releasing baseball sets, was a simply designed -white bordered, black and white photograph with no writing on the front. The back featured a detailed biography of the player shown.
It wasn't until 1941, which the 2003 set is based on, did Play Ball add colour. This was the final set produced by Gum Inc, who after the Second World War, returned as the newly named Bowman Gum Company.
The artwork on the 1941 Play Ball cards is incredibly stylish, featuring solid backgrounds and shadows with a comic type picture of each player. The back again had a detailed biography of the player. 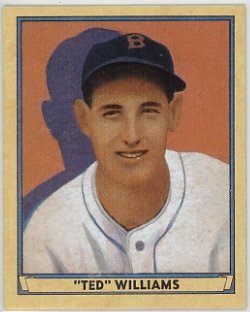