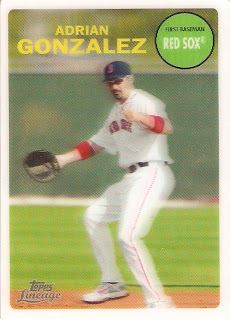 This 25-card set is based on the 1968 Topps 3-D set.
The Linegraph cards are based on the obscure XOGraph test issue from 1968. The original cards all have the following text on their backs.

This is an experimental XOGRAPH® card produced as a limited edition. Not for public circulation or distribution. Not for resale.
To be returned to:
Visual Panographics, Inc.
488 Madison Avenue
New York, New York.

The cards were inserted into 2011 Topps Lineage at a ratio of 1 in 12 packs. There are two variations available; black backs limited to 99 and Red backs limited to 1. Each featuring the original 1968 card backs.
Although the original experimental 1968 versions go for mega-money. This Lineage set is relatively inexpensive to complete, so complete it I will try.