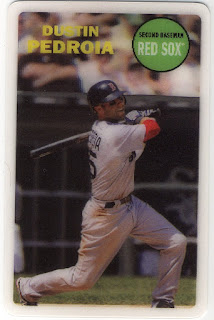 In retrospect I think that I should have just tried to collect the whole set of 2012 Archives. The inclusion of 1980 Topps design, Deckle Edge and stickers weren't enough, there was one set of inserts that definitely captured my imagination -the 3D set. Similar in design to 2011 Topps Lineage, which were also based on the experimental 1968 3D Topps release, only slightly larger.
The set contains 15 cards featuring some stellar names from past and present.
They were inserted in 2012 Archives at a ratio of 1in 8 packs.
Since there are only 15, why not collect the whole set?