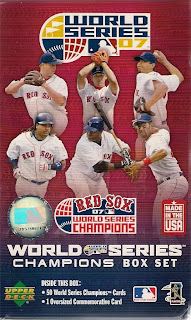 In my pursuit of Red Sox cards I cannot fail to get 100% from this box set sent by Eric from The Pettitte Pursuit.
The World Series Champions Red Sox Box Set contains:
25 Regular Season Players cards 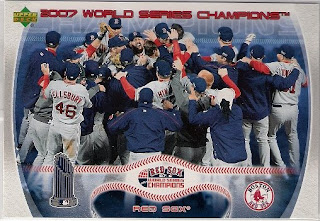 The Oversized Commemmorative card, which is 3 1/2in x 5 in. Has the Red Sox celebrating their win, but with no added photoshopping. After a 86-year gap between World Series titles ended in 2004, the Red Sox didn't need to wait nearly as long to add another ring to their collection. 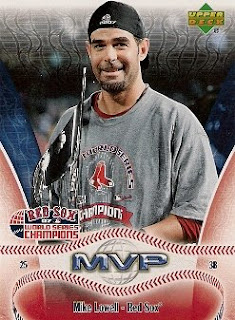 Mike Lowell, the series MVP gets his own card. He was named MVP after he had a .400 batting average, six runs scored and four RBI's. He lifted the Red Sox to a title win over the Rockies.