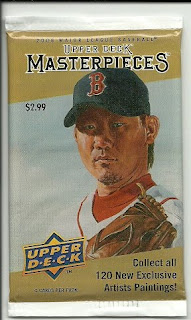 Here is another solitary pack. This time from Waxaholic. It doesn't seem like 4 years since this original 2007 Masterpieces hit the shelves. I loved the 2007 set so much that I decided to collect the entire base set. Its design was classy, the autographs were right there on the actual card and there was the quirkiness of cards like Curt's bloody sock, Ty Cobbs karate kick and Ozzie Smith's backflip. I had resigned myself to collecting 2008 as well, but by the time it arrived the magic had left. It was too similar. Yes I understand that may be too picky, what else could it be? Masterpieces was meant to look like it was painted on canvas hence the name. Even Jonathan Papelbon's victory roar couldn't save it. Maybe it was the inclusion of Yankee Stadium Legacy cards that tainted this and other Upper Deck sets. 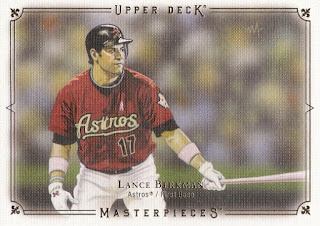 See tainted. No Red Sox and a YSL.
Just imagine if there wasn't 4 Masterpieces card but 3 and the 4th card was a YSL. Luckily it is included as an extra.
Posted by jackplumstead at 05:15