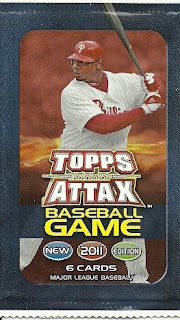 The big child in me likes Topps Attax. I have never attempted to play the game in any of the multiple variations available -Football, Star Wars, Ice Hockey, Soccer, Heroes, Wrestling. However the baseball variation looks the most complicated. Is it that complicated? The soccer version has only attack and defence numbers, there appears to many different possibilties on the baseball version. There are 258 cards in the base set which includes 25 mascots and 27 stadiums( which begs the question which mascot is missing?)
Anyway. I was sent a lonely pack of the 2011 Baseball version recently. It was purchased from 'The Dollar Store'. Without a shadow of a doubt, I am sure the Dollar Store would become my favourite place. Ever.
No Red Sox so far from this set, so any would be nice...please.
The pack
#41 Carlos Pena Cubs
#84 Francisco Liriano Twins
#124 Josh Hamilton Rangers
#139 Logan Morrion Marlins
#197 Troy Tulowitzki Rockies
#236 Citi Field
Did you know- Citi Field is the only MLB ballpark with foul poles that
are not yellow...instead they are painted orange. 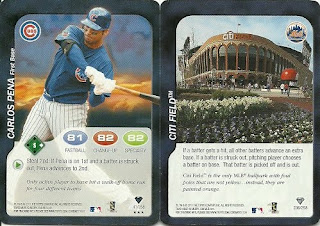 It appears that the cards have a diamond rating with stars. Meaning common, rare, ultra rare? I am guessing, so you may need the starter set to work this one out.
Posted by jackplumstead at 06:48