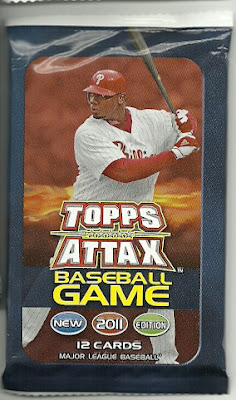 Another pack of cards from Dayf, this time a pack of 2011 Topps Attax baseball.
Just to clear something up that I wasn't sure of the last time I opened a pack of these- Which are the rare and ultra rare cards? A helpful reader dropped me a e-mail to say that the diamond in the bottom right corner denotes the rarity of the card.
As such:

So now you know. All a person, with ample amounts of time on their hand, has to do is create a checklist.
There are 258 cards in the base set, consisting of 206 players, 25 Mascots and 27 Stadiums. The cards are ordered alphabetically by first name. There are foil variations of every card, which should be regarded as a parallel set. There are two inserts, Mickey Mantle and  Babe Ruth Legend cards.

The pack from Dayf contains 12 cards. 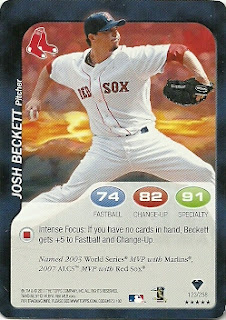 A two Red Sox pack, nice.
Of some interest of those inclined, there are two variations (error) cards:
#33 Brain McCann who can be seen with one hand or two hands on the bat and,
#154 Michael Bourne with a #21 or #42 jersey.
Posted by jackplumstead at 07:00