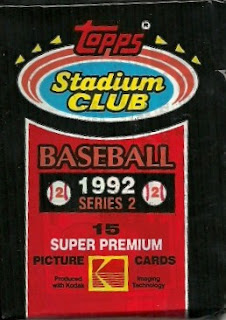 1992 Topps Stadium Club. What you may or may not already know is that Topps produced a Football (soccer) version of this set. 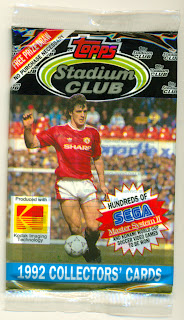 Same idea. Super premium cards, border less Kodak photography, however the cards were a lot less glossy than the baseball version. The cards were also released in a see through package with creased top and bottom rather than the tight fitting US version.
My football team is Charlton Athletic and there were two players available in the set. Goalkeeper Bob Bolder and Midfielder Rob Lee. There was only 200 cards to collect in the base set and 15 PROMO cards. Although considered rare, they can be often found on e-bay. 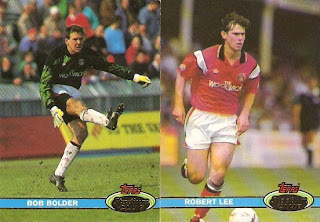 In the baseball version there are a whopping 900 cards, released in 3 series of 300 cards.  There are 34 Red Sox cards to collect.
In series 2 the Red Sox available were:

This pack comes from Waxaholic. 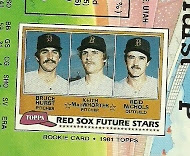 A Pony! Thankfully the players rookie cards are shown on the back of Stadium Club cards.