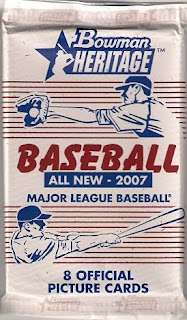 A while back in 2006 before I had entered the world of blogging I made a decision to shave down my collection. I found a number of trading sites, Hobby Kings, The Bench and Sportscard Forum and then Sports Card Collectors UK. This was a (very) small band of US sports collectors in the UK. Most were basketball collectors, myself and one other collector were baseball. Our small band grew well into double figures, the dizzy heights of 30. There was about 8 of us who were regulars, so an idea was hatched to start some group breaks. The first baseball break we did was a blaster of this product 2007 Bowman Heritage. It was meant to be a box of cards but there was mix-up in communication. I gave up any hits for all the Red Sox, which ended up being very few. There were quite a few basketball group breaks but I just found no interest. I did notice though that the game used cards and autos were outstanding. Two boxes of 2008 Goudey were the next baseball group break but after that things turned a bit sour. The administrator of the forum, a guy called Jo, who had organised the breaks very fairly and smoothly, suddenly had difficulty with purchasing the boxes and went AWOL. We had organised a Mayo football group break, I liked the look of this product and was interested to see what we pulled. It never happened and he still has my money, Bastard. He continued to post his breaks on you-tube under the pseudonym of UKcardcollector and I pestered him politely for a while until he stopped posting, Bastard. I learnt a valuable lesson, always pay through paypal which I did at first then didn't have enough in my account so posted cash-idiot.
So unfortunately whenever I see 2007 Bowman heritage and 2008 Mayo I get a sour taste in my mouth, which is a pity because they are both very nice sets.
I still need 3 cards and 2 short printed variations to complete the Red Sox team set. They are; 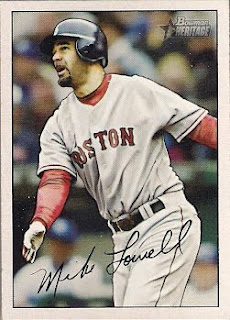 One Red Sox but I already have it.
Posted by jackplumstead at 04:32