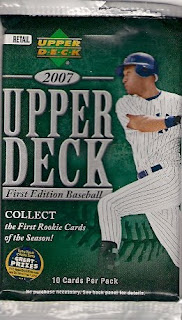 Almost unnoticeable on this pack are the words 'retail' meaning that it is available at both hobby and big chain stores, rather than just through the hobby shop. Or does it mean much more? Is there a better chance of pulling a parallel, a jersey or an auto rather than a mass of base cards. That being said, this is first edition, so no autos or jersey inserts anyway. What was included was a number of inserts roughly 1 per pack- so set builders, team collectors or those of us after a quick fix may well be happy.
I still need 8 of the 11 cards from the Red Sox set;
#4 Devern Hansack RC
#59 Manny Ramirez
#61 Alex Cora
#62 Trot Nixon
#63 Doug Mirabelli
#64 Curt Schilling
#65 Jonathan Papelbon
#66 Craig Hansen
The pack:
#25 Dennis Sarfate Brewers
#73 Jose Contreras White Sox
#139 Chris Snelling Mariners
#140 Cha Seung Baek Mariners
#153 Jerry Hairston Rangers
#177 Chipper Jones Braves
#233 Greg Maddux Padres
#247 Lastings Milledge Mets
#259 Freddy Sanchez Pirates
#FPF-AM Andrew Miller Tigers 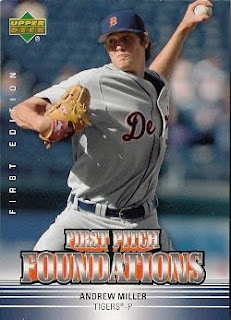 There is the one insert and no Red Sox. The photography in this set is first rate and I actually prefer the matt finish on the First Edition than the gloss on Series 1 and 2.
Posted by jackplumstead at 04:31