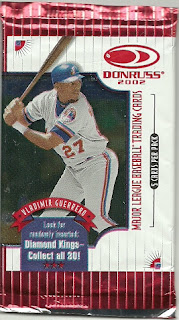 The 2002 Donruss Baseball set consists of 220 cards. Cards 151-200 are Rated Rookies and cards 201-220 are Fan Club.
There were a number of parallels, of which many were of a short print run (but not all) They were: Career Stat Line and Season Stat Line
There were inserts called: Diamond Kings, All-time Diamond Kings, Elite Series, Longball Leaders and Production Line. The Production Line inserts had a limited print run based on the 2001 stats of the player. It was divided into three sections On-base percentage, Slugging percentage and OPS (on-base plus slugging). To make this a little less confusing, the first 100 of limited Production Line cards were die cut. 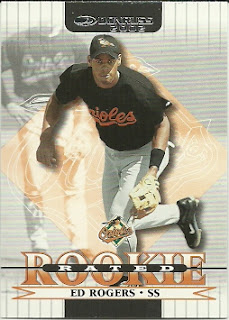 Still no Red Sox from these packs.