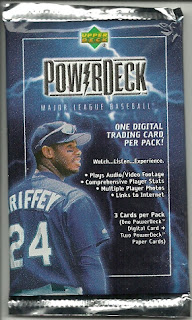 This can only be regarded as a gimmick, surely. Perhaps I am mistaken, maybe there were thoughts that this  'interesting' idea would take the card world by storm.
Each pack of PowerDeck's contained a CD, obviously shaped to fit snuggly in a pack of cards.
The CD showed highlights of the particular player. There were 25 CD's to collect. The paper cards included in the packs were called 'Auxillary', so the main set were the CD-Rom, the cards just happened to be in the pack too. There were 25 base cards as well. The checklist for the auxillary cards and CD-Roms were identical.
There were a number of inserts as well; Most Valuable Performances, Powerful Moments, Time Capsule . Each of these inserts were available in both auxillary (paper) and CD versions.
Each pack contained 2 auxillary cards and 1 CD-Rom.
The Red Sox available are:
7 Nomar Garciaparra,
13 Manny Ramirez
23 Pedro Martinez
﻿
I have one pack that was included as part of a ebay lot I bought recently. 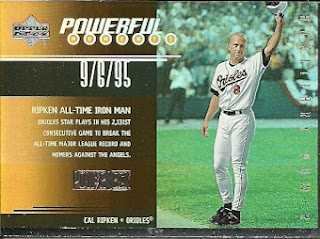 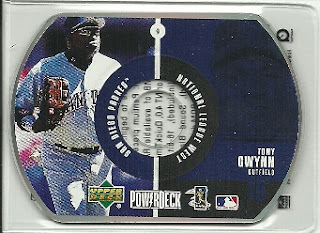