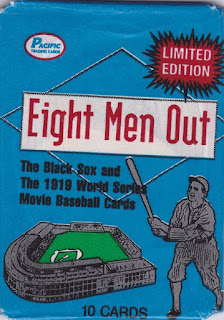 The second pack of this mini theme comes from 1988 and features pictures from the baseball movie 'Eight Men Out'.
The movie is about the infamous 1919 World Series between the Cincinnati Reds and Chicago White Sox (forever dubbed the 'Black Sox').
The cards are notable for a few reasons. The set has the only MLB licenced 'Shoeless' Joe Jackson card and also features cards of the actors, Charlie Sheen ( Major League), John Cusack, Christopher Lloyd ( Back to the Future) and for Walking Dead fans Michael Rooker.
I don't want to get in to some war about the best baseball movie, however 'Eight Men Out' stands very close to the top. Which makes me wonder why there hasn't been any other sets featuring baseball movies, besides this set and the recent Major League inserts. I would seriously consider a set based on 'The Natural' in the 1939 or 1940 Playball design.

This Eight Men Out set has 110 cards showing pictures of the actors in the movie and actual pictures of the 1919 Reds and White Sox players.
Each pack contains 10 cards and comes wrapped in a lovely wax wrapper shown above. 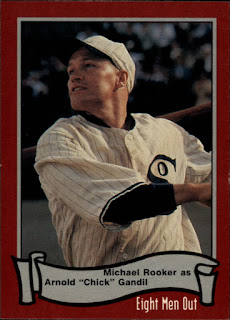