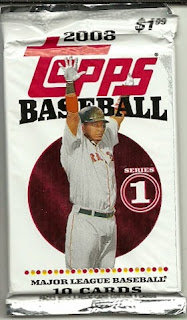 2008 Topps are one of more easily recognisable sets from recent years. The cards have a bold white border and circular font on the top of each card featuring the team name. The Series One packs featured Man Ram standing in front of a Japanese rising sun.
2008 Topps is a 660-card set split between two series. Each has 330 cards.
The set is also most remembered for 'gimmick' cards.
Card #234 The Boston Red Sox celebration card featuring New York City mayor Rudy Guiliani and card #FS1 Kazuo Uzuki, a fictional Japanese baseball player. Apparently not a 'gimmick' but an April Fools prank.
The pack cost $1.99 and contains 10 cards in the pack, although if there is a relic card the pack will contain 8 cards.
There are no Red Sox that I still need from this set.