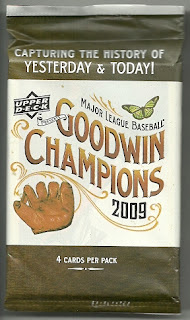 A while ago I set out to collect the whole base set of 2009 Goodwin Champions. It is now 2012 and this particular pursuit is still wide open. 24 cards still to go from the 150 base set. It is slow going considering there are 4 cards per pack and I really would like to clear the decks before attempting another pursuit in 2012. That doesn't include the 2012 baseball sticker album, which I will pursue when the album arrives.
This pack came from Cardboard Junkie as part of our hostage exchange program. 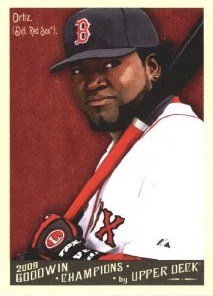 That's more like it.
A Red Sox card and one that is needed to complete the base set. Good pack.
Posted by jackplumstead at 14:00